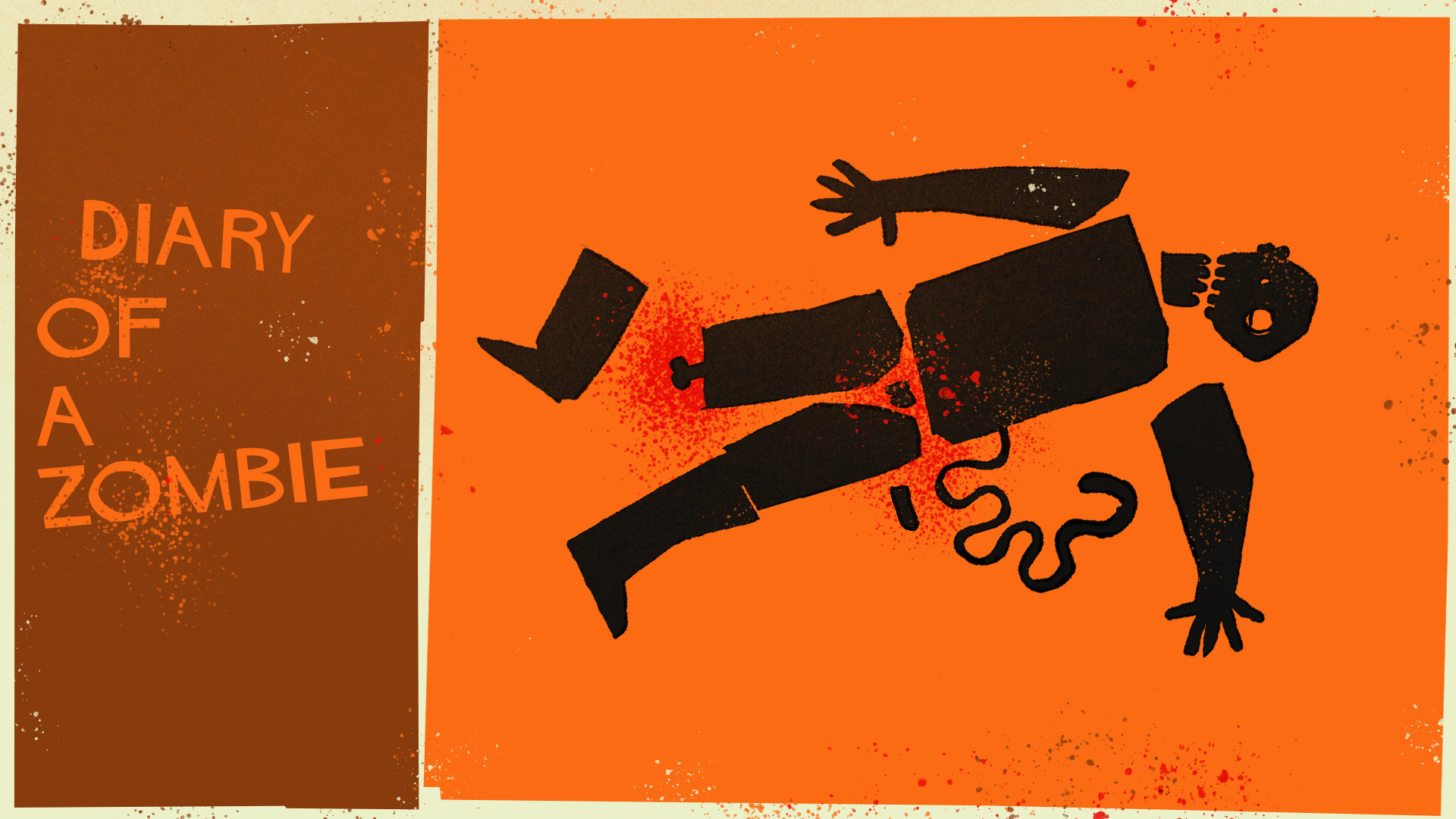 As The Walking Dead returns for its eight season we thought it was high time we gave airtime to the undead heroes of the show. We are proud to reproduce an extract from ‘Zombie 1387’s journal. A regular in the show, you’ll recognise 1387 from his distinctive lack of skin and threadbare khakis.

June 11th 2010 – Heck of a hangover!
So, here’s a weird one: I’m 90% sure I’m now a zombie. I don’t remember much, my mind is now filled with a sort of purple red cloud that just seems to be telling me to go and get food, but I do remember walking home from the pub and getting jumped by a load of guys while I was having a wee down an alley. They were absolutely pissed, couldn’t string a sentence together, and they bit me! Anyway, I’m going to go to the Walk-in centre later and see if they know what’s going on.

June 15th 2010 – New year, new me
Yep, I’m a zombie. I’m literally dead. The hospital was in chaos when I got there (hello, budget cuts) with crowds of people hanging around outside trying to get in, but they’d blocked the entrance! I ask you, if I weren’t so busy being dead I’d be sending some letters. In the end, I gave up and went for a walk and ate a cat I found.

July 20th 2010 – Memories, of the way we used to be
Had a bit of an introspective one last night. Got a few bursts of my life before those idiots bit me. Not much, just glimpses of people and places. One of the weirdest things were the smiles, because zombies do not smile much. Or at all. Some of them don’t even have a bottom jaw! I’m sure I’ll be fine, I always get like this on Sundays.

September 6th 2010 – Party time!
It was one of the gang’s birthday yesterday and in a grand stroke of luck we came across an overturned car with a family trapped inside it! Yum, yum! Bon anniversaire, Claire!

October 31st 2010
Apparently as zombies we don’t celebrate Halloween, which seems like a missed opportunity to me, but I’m keeping my mouth shut.

November 20th 2010 – Every day I’m shufflin’
Well, here we are… I’ve been a zombie for six months now and I think I’m starting to get the hang of it. Turns out I’m not the only one and I’ve managed to get a little gang together and we hang out and eat people and just sort of stand around groaning together when nothing much is happening. I don’t miss much about being alive, either, as my insatiable desire to consume human flesh keeps me pretty-busy.

December 15th 2010 – A Christmas miracle
Good news! I found my bro! Well, I found half of him. Me and a few hundred of the guys were just cruising down this highway looking for someone to eat and I found Grant on the side of the road! His legs and torso had been crushed by a truck or something, but he was actually in pretty good spirits otherwise. He got a bit pissed off when I told him that due to the decomposition of my muscles I wouldn’t be able to put him in a wheelbarrow and bring him along, but then he got distracted by a crow eating his eye so I hot footed it out of there. I’m sure I’ll see him at mum’s 65th.

January 9th 2011 – I H8 humans
Life as a zombie can be pretty boring sometimes. We walk, we eat, we stand, we groan, we walk again. But occasionally you bump into some living people, and that’s usually pretty interesting. Sometimes they’re cool and just leave you alone, but other times they’re absolute idiots and start laying into us. I mean, you wouldn’t stab someone with flu in the face with a sword, would you? So why is it okay to do it to zombies? Once again, it’s one rule for some, and another for everyone else.

March 2nd 2011 – Sole searching
My shoes finally fell apart today. They guys are keeping an eye for some new ones but I’m not holding out much hope. Even without any flesh on them I still have really wide feet.

April 1st 2011 – Funny guys
Despite the diary, I’m rubbish with dates and totally forgot about April Fool’s Day. Unfortunately for me, the guys did not, so while I was in a sort of stasis, quietly enjoying the uncontrollable desire to consume human flesh, they drew a cock on my back, which is annoying on many levels, not least because of, well, you know…

May 23rd 2011 – Motorcycle emptiness
Bit of a scare today when a load of lunatics on motorbikes buzzed us and shot a load of my pals in the head! Turns out you can die twice! Didn’t manage to get a number plate sadly as we’re all essentially blind now.

June 11th 2011 – Happy deathday to me
So, I’ve been a zombie for a whole year now and what have I learnt? Well, I’ve learnt that decaying flesh actually smells great and I don’t know what all the fuss used to be about; I’ve learnt that breathers are mostly violent idiots who shoot first and don’t even bother with any questions; I’ve learnt that endless stretches of anonymous American highway are a lot more fun if you’re with friends, and I’ve learnt that zombies can and will fart when startled.