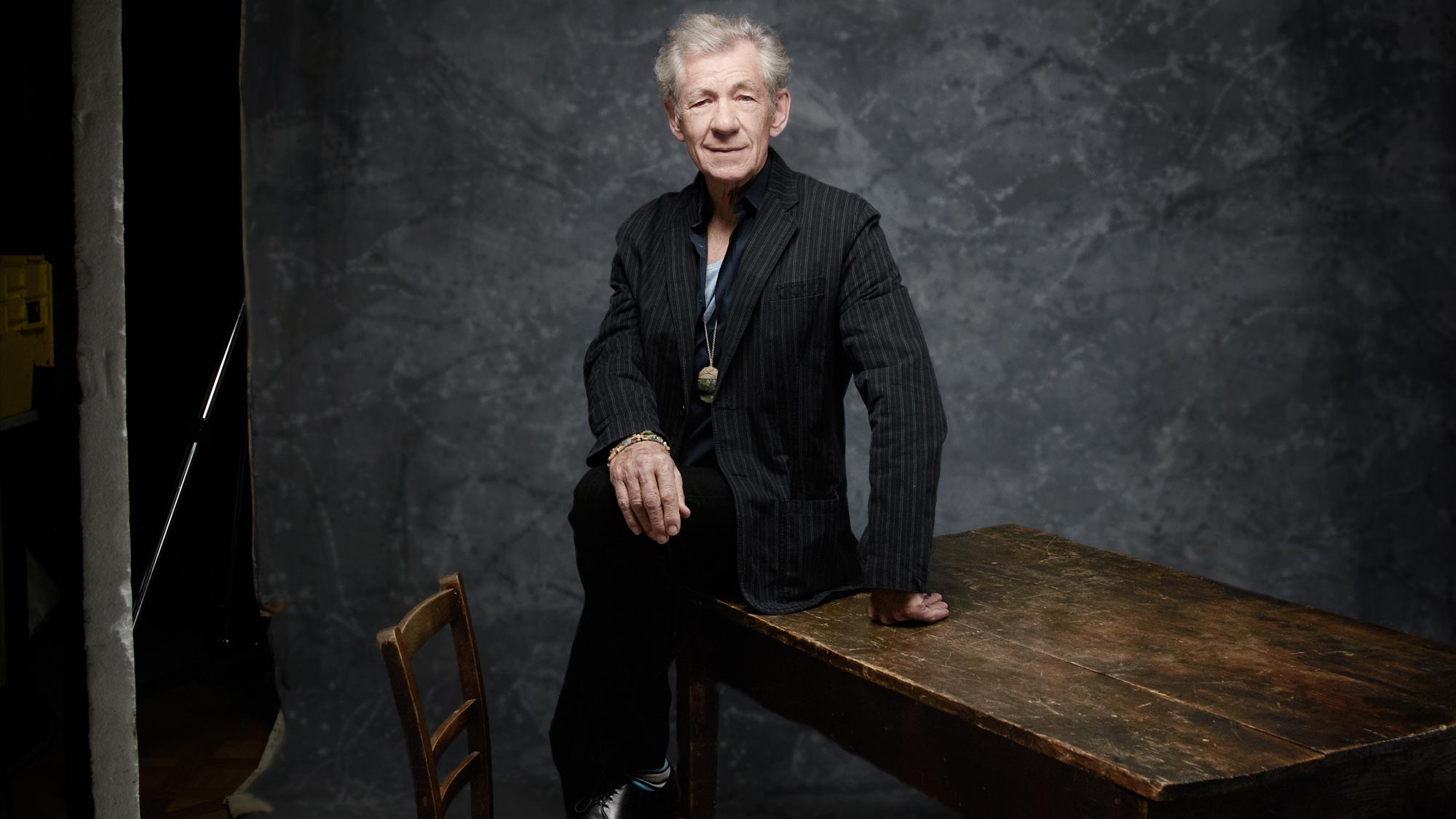 Commander of The British Empire; Golden Globe winner; twice nominated for an Academy Award; Magneto, leader of the Brotherhood of Mutants; Gandalf the wizard; Dodgy Mel from Coronation Street; Shakespeare’s Prospero at the Paralympics; very big in New Zealand.  It’s a CV that reads more like Idi Amin’s business card than the real-life personal achievements of a Burnley born, Wigan raised over-achiever who, after twelve years living under a floppy hat, is known to virtually the entire cinema going universe as simply ‘Gandalf’.

With such an impressive list of accomplishments, it’s truly a wonder the 79-year-old bothers to get out of bed anymore. And yet, the man is unstoppable. When the earthquakes decimated  New Zealand a few years ago, McKellen responded with an impromptu one-man show across the country, delivering Shakespeare to a remarkably receptive Kiwi audience who would “get up on stage and do some acting at the end.”  And of course he has spent the best part of 12 years bringing the character of both Gandalf the Grey and Gandalf the White to life, first in The Lord Of The Rings, and now The Hobbit. But can anything surpass the brilliance of the first trilogy?

In The Hobbit, Bilbo says, “I like visitors as much as the next hobbit, but I do like to know them before they come visiting.” Lord Of The Rings may have snuck up on us, but there’s no mistaking the air of expectation around this film. Was the pressure noticeable on set?

No, I don’t think it works quite like that. There are so many millions of people who admired the first three films and they can’t wait. They are not waiting, worried, that The Hobbit won’t be as good as Lord Of The Rings, they just want more and that’s what they are going to get.

And what was it like returning to New Zealand? You must be a national treasure by now…

Have you been to New Zealand? Kiwis are not very demonstrative, there are no red carpets waiting for you and screaming hoards of fans, they are very laid back. We’ve become part of the scenery. It’s a little bit like going home. Wellington is quite a small place and they are used to big films now. And of course Peter Jackson is a local hero who has built up a major film industry with state-of-the-art studios so I wouldn’t say they are blasé – they are welcoming – but they don’t get over excited

This time of course you’re playing a significantly younger Gandalf…

…Not quite. If  you’re seven thousand years old, then sixty years doesn’t make much difference. The fans mustn’t get too excited that they are going to see a younger Gandalf…

There must be some key differences though?

Well, it’s Gandalf the Grey, not Gandalf the White. There were three Lord Of The Rings films and I was Gandalf the White in two of them, so I’m back to being the Grey; the guy who lets off fireworks and looks a bit grubby around the edges and likes to smoke and drink and party. That’s the character, the long bearded, rather scruffy guide tramping around Middle Earth. The fact that the events are happening sixty years earlier doesn’t really affect the way I am playing him.

For me it was all terribly familiar but for the other actors, yes, when they first saw characters they had only ever known on the screen I suppose that was a moment when they  realised, “Oh, I really am in Middle Earth.” But they rapidly made it their own. There were thirteen dwarfs that we hadn’t met before but within a  week they were heart of the project because it’s their story.

Did the new guys come to you for advice?

Well of course they all want to know, “What’s Peter Jackson really like? Will he lose  his temper?” No he won’t. “Is he going to be helpful?” Yes he is. “Does he always go this slow?” Yes he does. So there was a little bit of that, but they rapidly realised the pace of filming and how it would go. As I say, it’s not quite like filming anywhere else in the world. These are Kiwi films and you are a long way from Hollywood. It’s very much a local industry; you live so close to where you film, you could almost walk to work. Filming at Pinewood Studios in London means three to four hours travel a day for me. In Wellington, it’s ten minutes away and that’s wonderful; you bump into each other off duty at weekends and it feels like a family. Lord Of The Rings was famously filmed in an old paint factory. Did a new fancy studio made a big difference on set?

No, it has felt very much the same. The old paint factory still exists and is where Bag End was resurrected. There’s no heating in there, or air-conditioning or sound proofing, but just across the path there are state of the art studios built for King Kong and Avatar and these are just as it should be; up to date and modern. However, every single word that I spoke in Lord Of The Rings was dubbed on later because the sound was inadequate, and we’ve done the same thing again. Not because the sound was inadequate but because Peter wanted the option of changing things in post production.

Post production has also involved a lot of 3D; even Middle Earth isn’t safe from its clutches…

Well although these films are being shot in 3D and at 48 frames-per-second, which is a unique technique not used before in a feature film, you’re not really aware of that. Yes, you can nip into Peter’s tent and watch the film in 3D the minute you’ve shot it, but it doesn’t affect the way you act or the way you film.

The dwarfs endured hours each day in the make-up department putting on their costumes. You certainly lucked out with a long robe and pointy hat…

Well I have a wig, moustache, beard and a false nose which does take time, but we got it down from one-and-a-half hours to 40 minutes, so yes I was very lucky. I would swan in for my 40 minutes of makeup and the dwarfs had been there for over two hours putting on their stuff, and I didn’t envy that; they looked like uncomfortable heavy costumes

Especially as you spent so much time out on location

That was a difference this time – we did it all the locations in the same 2 months period, whilst for the last films we dodged out for odd weekends at a time. This time it was all done at the same time, which involved a lot of travelling around and was extremely enjoyable. It was like going on holiday really, all the equipment and 900 people on the road.

No green screen at all?

There wasn’t a lot of green screen you know. I mean, what you see in The Hobbit was actually there. If we appear to be in front of high mountains and exciting scenery that’s because we were there. The amazing sets that were built in the studios were terribly realistic; the trees, the buildings the stairs were all there. It was constantly exciting to go and see the dragon on his mountain of gold. We didn’t have to use our imagination very much at all.

Yes and that is going to be a quality of The Hobbit that distinguishes it from Lord Of the Rings; it’s more fun and it’s not as dark a story. They are not saving the world you know, they are just going out on an adventure. In Lord Of The Rings the principle character doesn’t make it back to Hobbiton, while Bilbo of course does come home, so there is a lightness and that’s reflected in the casting

You are known the world over as Magneto from X-Men and Gandalf from Lord Of The Rings. Do you find it irksome that you have to wait for something like the opening ceremony of the Paralympics to remind people you’re also a dab hand at Shakespeare?

Well, since Lord Of The Rings, I’ve done did King Lear, Waiting For Godot, and even while filming The Hobbit, I came back and went to Chichester to do a play by Eduardo De Filippo. So yes, I like to keep my hand in as a theatre actor and I wouldn’t like to lose touch with the fun of playing to a live audience. Now, the fact that people don’t know I’ve done those things that doesn’t worry me too much, the audience who are there know I’m doing it. Obviously there will always be more people that know about Gandalf than know about King Lear.

And what name do people in the street shout the most? Magneto, or Gandalf?

Actually someone just came to take away the rubbish and he said, “Oh look, its Magneto” but younger people normally see Gandalf. And sometimes, just sometimes, they shout, “Oh, it’s Ian Mckellen.”

You went to Comic-con to promote the film. What was it like meeting the fans close up?

The level of enthusiasm was just overwhelming.  It’s quite unusual to be making a film that you know people are desperately wanting to see, and I don’t sense any nervousness that somehow Peter Jackson isn’t going to be able to pull it off.

Does their enthusiasm for Middle Earth still surprise you?

At the end of Lord of The Rings the Fellowship popped into Wellington and had matching tattoos. Any such shenanigans this time around?

Well Graham McTavish who plays Dwalin organised for all the dwarfs to have a ring made, and as Gandalf I had one too. But it’s tradition on the last day of filming for Peter Jackson to present you with your character’s weapon, so I’ve got the sword, Glamdring, in my house, and this time I was also given Gandalf’s staff and hat. 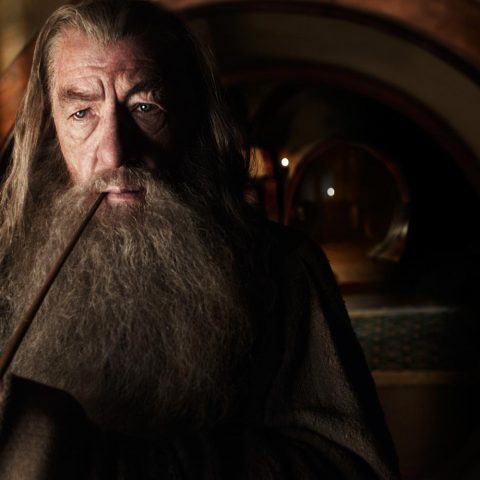 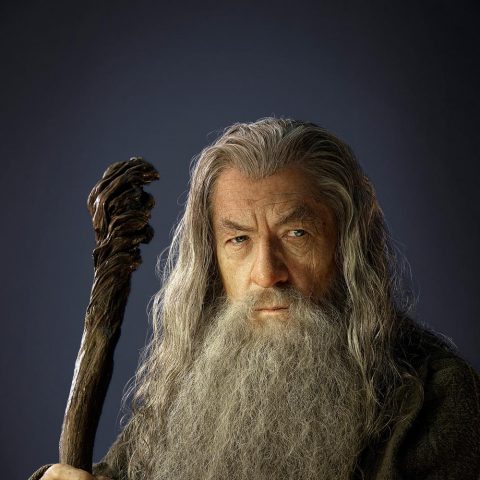 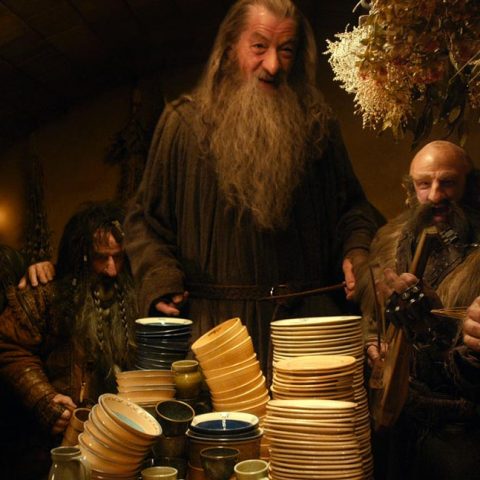