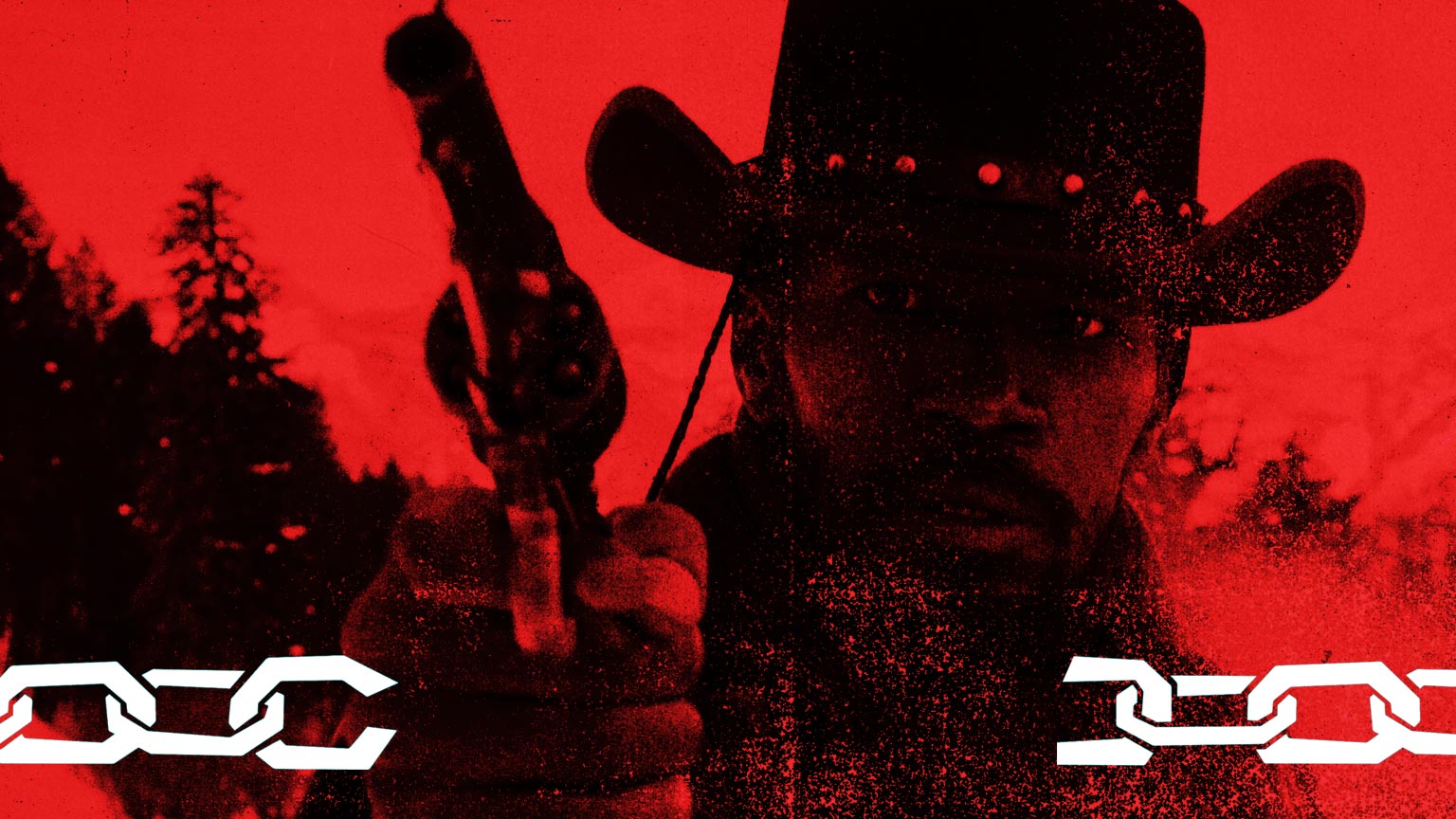 To get to the set of Django Unchained you have to surrender cameras, phones and recording devices to one of the assistant directors, then circumnavigate the demure black girls dressed as 19th-century maids who are shyly electric-boogalooing to Janet Jackson’s Control album, playing softly on his in-car stereo. The location is a still-functioning sugar-cane plantation about an hour’s drive out of New Orleans; an oasis of leafy green with a dark past that is presently being re-enacted in its grounds.

Even to the cast, it has been something of a shock. “The first day I showed up,” recalls Samuel L Jackson, “I went out to the plantation to say I was there, and when I arrived they had all these slaves out in the field, bent over picking cotton, and there were these white people sitting up on horses with shotguns. It was right in your face!” He laughs. “I was like, OK, this is what we’re doin’ and… this is very real. And that’s great, because everything is there – you don’t have to imagine it.”

The film is Quentin Tarantino’s eighth in 20 years and without doubt his most ambitious to date, a historical epic – inspired by his love of spaghetti westerns, in particular Sergio Corbucci’s entirely unrelated 1966 contribution, Django – soused in his trademark, operatic violence and served with a side order of blaxploitation. Starring Jamie Foxx, it tells the story of an African-American slave who is rescued from a chain gang and trained as a gunslinger by German bounty hunter Dr King Schultz (Christoph Waltz). In return for Django’s help in tracing a gang of wanted men, Dr King promises to help him rescue his wife Broomhilde (Kerry Washington), who has been sold to slave-trading cotton magnate Calvin Candie (Leonardo DiCaprio). “To me,” says Washington, “Broomhilde’s very much the woman in the tower that has to be rescued by her hero.”

Just as his last film Inglourious Basterds squared up to the horrors of the Holocaust, this one is taking on perhaps the most shameful chapter in America’s history: its role in the import and sale of African people as human cattle, until abolition in 1865. Many others have tried to address it – from Steven Spielberg with The Color Purple to Jonathan Demme and Beloved – but few have succeeded in making anything more than a well-dressed, earnest, ultimately drab history lesson.

“Y’know,” says Reggie Hudlin, one of the film’s three producers, “many great filmmakers, when they come to doing black material – it could be period, it could be contemporary – suddenly it’s as if their filmmaking powers leave them, and they make some of their worst films. The key with Django Unchained is in the execution. It’s deadly serious, but with the dark humour that is the hallmark of all Quentin’s films. The absurdity, the action, the suspense, the triumph, the horror, all the things that we’ve come to expect in a Tarantino film are here – at the peak of his abilities.”

_On set, Tarantino has his head down, shooting Django and Dr King’s arrival at Calvin Candie’s estate, Candie Land, “A 15-page scene,” he says, “with most every character in the fucking movie in it.” The subject of racism is far from his mind at this moment in time; right now he just wants to keep going and get it done. “You just have to shoot your way through it,” he shrugs.

Though there are shades of Basterds here, the director denies that his 2009 film gave him the confidence to step things up a level and tackle the elephant in a room much closer to home. “I wasn’t ever lacking in confidence, because I’d wanted to deal with this story for about ten years,” he says during a rare break. “I don’t think one led to the other. But I did have Basterds in my back pocket, all right, as far as I was concerned. You come off a project that does well, you always have even more confidence about what you’re doing. I could have written this before Basterds, but…”

He pauses. “Well, y’know, here’s the one thing about that. Forget about how well or not the film did, I did need to make Basterds first, but not because of the subject matter – because it had been in my mind for a long time. Before I could climb this mountain I had to get over that mountain. See this mountain to see the other mountain.”

DiCaprio is on set today, even though he doesn’t need to be, running his lines for the benefit of his fellow actors. The Southern twang suits him, and there’s a boyish glee to the sadistic relish with which he unleashes his right-hand man Billy Crash (Walt Goggins) on the new arrivals, a motley bunch of slaves – Mandingos – that will be forced to fight each other to the death.

Did Tarantino ever think about DiCaprio while he was writing?

“No,” he says, “not at all. It sure does suit him, but I didn’t write it with him in mind at all. Actually, my conception of the character in the writing stage was that he was a little older. It was Leo who read the script and got in touch with me about the possibility of playing the part. I thought, Ah, that’s a different idea than I’d been thinking… Now, I’d kept the character kinda open, so I could go a bunch of different ways. But during the writing, when I would see Calvin, he was a little older.”

The change has paid off, making Candie more of a dangerously capricious spoiled brat than a hardboiled tyrant. “Oh yeah” says Tarantino. “I look at him as a kind of King Louis XIV kind of character, in his little Versailles. He’s like a boy emperor. My feeling is that he’s fourth-generation cotton – the fourth Candie to own this estate. His daddy’s daddy’s daddy started this place, his daddy’s daddy continued it, and then his daddy continued it. They’re all big cotton men. He’s grown up in it. And now he’s bored with cotton. It takes care of itself. So fighting Mandingos has become his pleasure. That’s his interest. That’s his hobby and it has taken over his life. Because everything else is taken care of – he’s been born into this and he’s bored with it now.”

As for Django himself, Foxx is keen to stress that the film is about the personal as much as the political. “This is a love story,” says the soft-spoken Texan. “It’s buried a little, but we’ve put some ingredients to it. And that’s what fuels Django. He’s not trying to stop slavery. Django’s not trying to do anything but find the love of his life. And even if he were to find her, if she’s trying to survive, it wouldn’t be smart for her to recognise him. The thing would be to see him and then turn away. But when he does see her, he sees that she’s still fighting, and that’s what it’s about.”

Foxx and Waltz make a great team, with Foxx noting that their odd-couple differences are the main reason they “sorta clicked”. But this is definitely an ensemble piece, and although he won an Oscar for his starring role in 2004’s Ray, Foxx is aware that he can’t rest on his laurels here.

Waltz, as usual, is taking all this in his stride, having been privvy to pages from Tarantino’s developing script – mostly the parts involving Dr King, a character written specially for him – over the past couple of years, reading them in bursts at Tarantino’s kitchen table.

“Apparently he thought about making a spaghetti western for a long time,” he smiles. “And who hasn’t! In Europe we’re very familiar with spaghetti westerns, and I remember the original Django coming out. I was too young to go and see it because it was an 18 certificate, of course. I tried for a long time, because Django was the archetypal western character. Any western hero when I was a kid was either Django or, if it was funny, it was Lucky Luke, which was more or less the spaghetti western idea in cartoon form. But humorous – and Django was serious.

“That,” he notes, “was serious coolness.”

_At the helm, meanwhile, Tarantino is still chipping away at the scene. He’ll be 50 next year and he admits that filmmaking is not getting any easier. In fact, he’s thinking of giving it up altogether. “It’ll be when I’m 60, or before that, if digital takes over too much,” he shrugs, without showing any emotion. Why? “Because it’s a hard job!! It’s hard to keep your focus on film when you’ve got all these other things fighting for it. Wives, children, life, money, career, second home, third home, pay for the kids’ school. All this stuff, the other things, becomes more important. And that’s not my case. I don’t have any of those distractions. This is all… I’m all in. Don’t have a wife, don’t want a wife, don’t have kids, don’t wanna have kids – until I’m done with my journey.”

On Django Unchained alone, that journey will stretch from November 2011 to July 2012, involving nearly five months of shooting. Everyone involved says the process has been long and arduous – so much so that the likes of Kurt Russell, Kevin Costner, Sacha Baron Cohen and Joseph Gordon-Levitt dropped out along the way – and yet, unusually in the age of TMZ and ‘citizen journalism’, so very little of its story has been documented. One of the last remaining analogue holdouts, Tarantino continues to respect the traditions of filmmaking as a team effort, and though no one has been able to take the photographs to prove it, they’ll remember this movie for a very long time.

Indeed, Samuel L Jackson, who plays Calvin Candie’s machiavellian housekeeper Stephen, recalls one moment in particular, the day of a long dining-room scene up at Candie’s house. Extras dressed as serving maids were sitting round, and during a break Tarantino’s soundman, Mark Ulano, put on his mixtape. The girls started tapping their feet, dipping and swaying to the music, and suddenly on came My Prerogative, the Bobby Brown song.

“Well,” says Jackson, “Jamie grabbed a headset and mic from an AD, got up and started lip-synching to the song, doing the exact same dance Bobby Brown did in the video. The girls started dancing with him in their slave outfits, and there was Jamie in his cowboy outfit and his gun, doing this hip-hop dancing.”

He laughs. “It was the most bizarre but wonderful thing. And shamefully nobody recorded because there were no cellphones around on set. So nobody saw it – except with their naked eyes.” 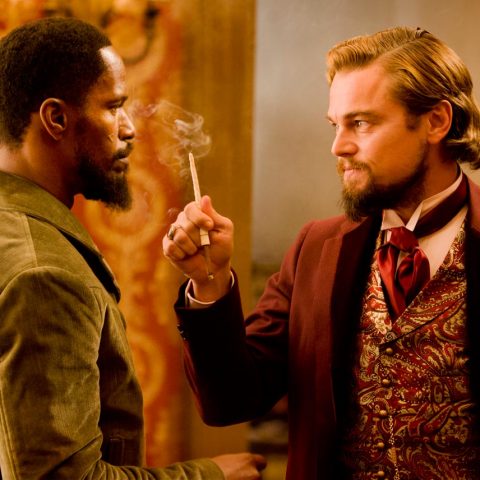 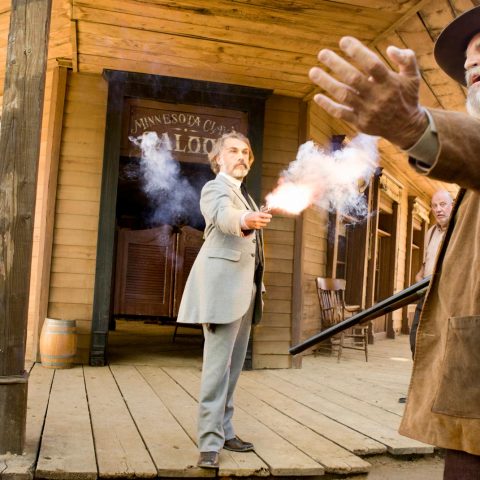 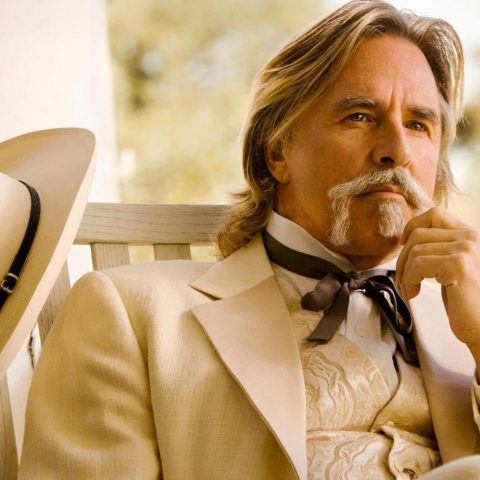