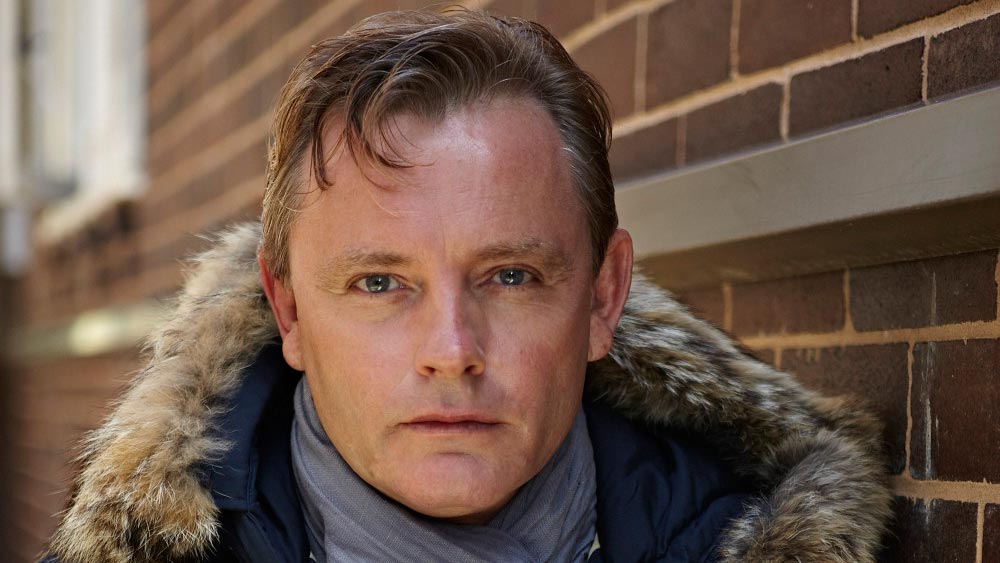 _ It’s good to have a change of scenery
I’d been living in the UK for 14 years and the way the economy was going I decided to move back to Sydney. I arrived in Australia with literally zero plans. The script for A Few Best Men landed on my desk and although I usually write all my own stuff, I always have, a friend asked if I could read it. It was originally set in the UK and in the first couple of pages I laughed out loud a few times, which is very rare. I realised it was incredibly dumb, completely endearing, a load of adorable nonsense. I thought, ‘Fuck it’. My criteria was; we have to do it immediately and move it to Australia.

_ I’ve always wanted to bury Sandy from Grease
And I got to do it in this movie. I said to Olivia Newton John, we’ve got to take Sandy out and kill her. She read the script and was like, ‘Are you completely insane? I can’t do this.’ The character is the mother-in law from hell. Half way through filming she said to me, ‘I’m never going to work again am I?’ And I said, ‘Nope’.

_ If you’re going to work with animals. Work with sheep
We did terrible things to Ramsey the sheep on A Few Best Men. We dressed him in drag, shaved him and dyed him different colours. He was a trooper, it took him a week to find his feet, but once he got to know the actors he was fine. The amount of footage I’ve got of him defecating is frightening. Kris (Marshall) was very good at getting his hands underneath and catching it before it destroyed the set.

_ Work with the same team
I believe that my job as a director is to create a direction which has boundaries that are wide enough for people to move within and what you do within those boundaries, as long as you are moving forward, is ok. I’m not letter perfect, I don’t mind if an actor, production designer or writer comes up with a better idea as long as we’re moving in the right direction.

_ I like the fact the wedding film genre has changed
I once screen tested Patrick Swayze and he used to have to walk around with security guards. And I was like, ‘Isn’t this a bit of overkill?’ And he said, ‘No you don’t understand, I’m the guy walking in the mall who gets smashed in the back of the head by a guy who’s been forced to watch Ghost three times’. Rom-coms and wedding movies used to be pretty standard and aimed at girls while the boy sits there bored out of his brains. Wedding Crashers was the first to do a wedding film for boys, the girls could still come see a rom-com but the boys get to see appalling anti-social behaviour which happens at every wedding.

_ I was the first wedding-ographer
I’ve seen such terrible stuff. From the age of 13 I was filming two or three weddings a weekend and I had a camera the size of me. I can look at a wedding and within ten seconds I can tell if they are going to make it or not.

_ I always carry around a notebook
It just has bars and restaurants or things I see which I jot down. It’s like a bible. The best thing I like about writing is the first stage of the process where you can dream of anything. If you write ‘they blow up San Francisco’ in that first draft, they have to blow up San Francisco. Everything after that becomes a compromise. I’ve accepted that now. The first draft is the first one that takes most chances, it doesn’t take me very long to write, but then I think about it for two or three years.

_ I need silence to write
I have to go away to block the world out as I have so many commitments. If I say ‘I’m writing, fuck off’. I really mean it. The odd idiot who decides to break that rule really gets both barrels.

_ Nearly dying was my life starter
I cannot recommend it highly enough. Go throw yourself under a bus and try and survive, it might really wake you up. I was 40, happily ensconced in London, I had become comfortable and I dealt with my mid-life crisis not by buying a sports car but by nearly dying in a skiing accident in the French Alps. I was told I was going to die. I was given fifteen minutes to live and told to make my peace. I woke up realising it wasn’t a second chance but a reminder of how little time you have left.

_ I have zero tolerance
There was a part of me that thought after my experience I would become a nicer person and help old ladies across the street but I’ve actually become a more angry person. I’m so focused. My tolerance has gone completely, patience is totally over rated. My attitude is, ‘No I can’t afford to sit and talk about this for hours we have to get on with it’.

_ I’m currently doing the weirdest thing I’ve ever done in my life
I’m hosting a reality TV programme. It’s Priscilla based and the idea has been floating around for many years. I finally said yes but they then spun around and said, ‘Can you host it?’ So we’ve been driving around Outback towns making locals put on drag shows. We’ve selected a handful of them, getting them on a bus and driving them from Los Angeles to Broadway putting on even more drag shows. It’s hysterical. The great thing is everyone gets the joke, and globally Priscilla has such a legacy, there’s no question of homophobia. Stick on a thumping disco tune and everyone’s on their feet.

_ Being a TV presenter is hard work
For the first time I’m on camera which I’ve never done before. It’s ok to do a 14 hour day when you’re off camera, you can slump in a chair the next day and come to work in your underpants. But having to continually turn it on for the cameras is exhausting. For the first time I’m feeling very sorry for actors.

Current workload
I Will Survive (2012)

Awards he narrowly missed out on
Nominated for a BAFTA in 1995 for The Adventures of Priscilla, Queen of the Desert
Nominated for the Cannes Film Festival’s Palme D’Or in 1993
for Frauds

Next articleAkiva Schaffer: Out Of This World